How important is it to have a .com domain name?

Is it really that much better than .co, .net, .io or any other popular top-level domain?

We ran an experiment with 1,500 people to find out.

Here are our findings.

Key finding: which domain extension is best in 2022?

In short, our study shows that .com outperforms all other domain extension options. But read on for more details — and to see how 7 other TLDs performed in our test.

You can also click here to get a PDF version of the full results, including a few bonus demographic-specific takeaways that aren’t in this article.

How much do people trust .com vs .org, .co and other domain extensions?

A domain people trust is more likely to get clicked on, linked to and shared.

Making it easier to build a brand with.

Here are the perceived trustworthiness scores of the 8 top-level domains we tested, on a scale of 1 – 5: Key takeaway: .com is the #1 most trusted domain extension, with .co in a close second place.

How memorable are different domain extensions?

An important factor for any URL is how easy it is to remember.

The question we wanted to answer is, are people more likely to remember URLs with some TLDs over others?

As you can see, yes they are: The .com domain extension comes out on top here again, with a 44% memorability score.

That means people correctly remembered the .com URL 44% of the time.

Second place goes to .co again, but this time it’s a wider gap: .co earned a 33% memorability score. So it’s a quarter less memorable than .com. Quite significant.

Interestingly, .biz has a memorability score of 31%. Which is actually better than .us, .io, .net, and especially .blog (which is the least memorable, at 24%).

I was surprised to see .net perform so much worse on this test than .biz.

However, it makes sense considering that mental categorization is a major part of how memory works.

My theory is that people put the .net TLD in the same mental category as .com: they’re both general common TLDs that are often used for commercial sites.

However, since .com is the most dominant TLD in that category, .net often gets mis-remembered as .com. (This theory is supported by the next test result, which you’ll see in a minute.)

On the other hand, .biz may not fit into the same mental category as .net and .com.

If you see example.com, example.net, and example.biz, doesn’t the .biz version jump out at you a little? (Even if it’s in a bad way.)

That may be why .biz domains are more memorable — despite being less trustworthy — than .net ones.

Just to see all the data we have so far in the same place, here are the memorability results again alongside the trust ratings we saw before. So far .com is winning this race, with .co in second place overall and .org in third.

Key takeaway: .com URLs are over 33% more memorable than URLs with other TLDs.

When people remember the top-level domain incorrectly, which TLD do they remember instead?

This last factor is an interesting one:

This helps us see how much of a bias people have in favor of each TLD.

The results of this test show an even bigger difference between .com vs other domains. 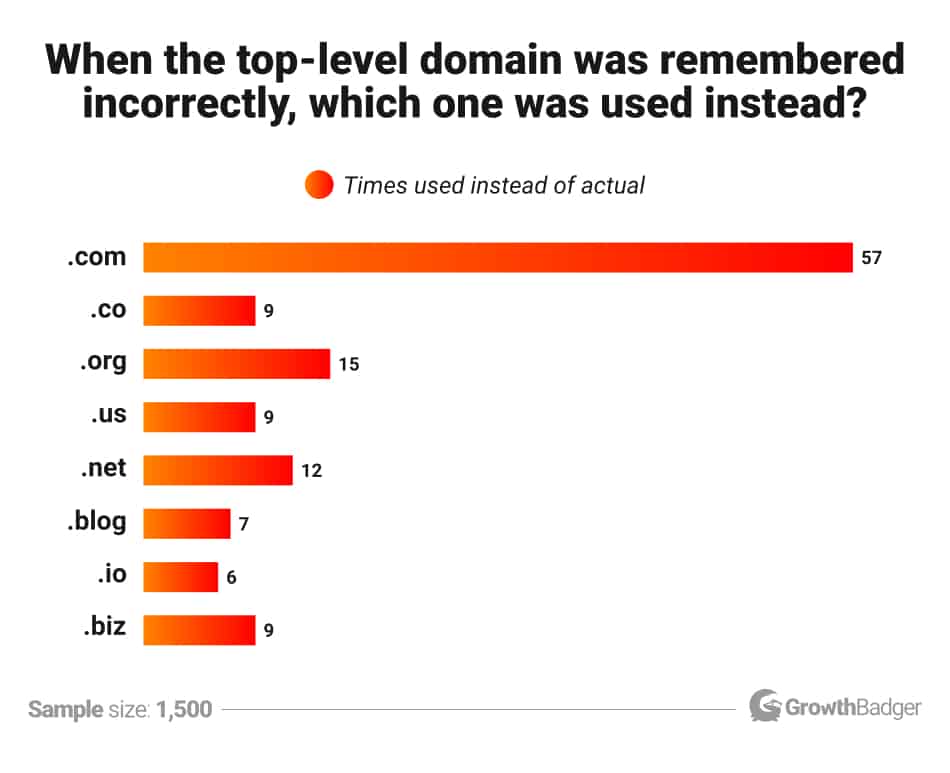 Out of all the wrong-but-almost-right answers, 57 of them said .com instead of the correct TLD. That’s 3.8 times more often than the next highest, .org.

When people aren’t sure which TLD a website uses, they’re much more likely to guess it’s .com than anything else.

In other words, .com domains are still thought of as the default.

The distant second place goes to .org, which people guessed only 15 times: 26% as often as they guessed .com.

Not shown on the chart above is the .co.uk domain suffix, which received two guesses. But it wasn’t a subject of this study (maybe I’ll do another study to cover more country code top-level domains/ccTLDs).

Key takeaway: People are 3.8 times more likely to assume a URL ends in .com than in anything else.

Conclusion: Rankings and comparison of all 8 domain extensions, plus expert opinions

Here are all three ratings for the list of domain extensions in a single chart: 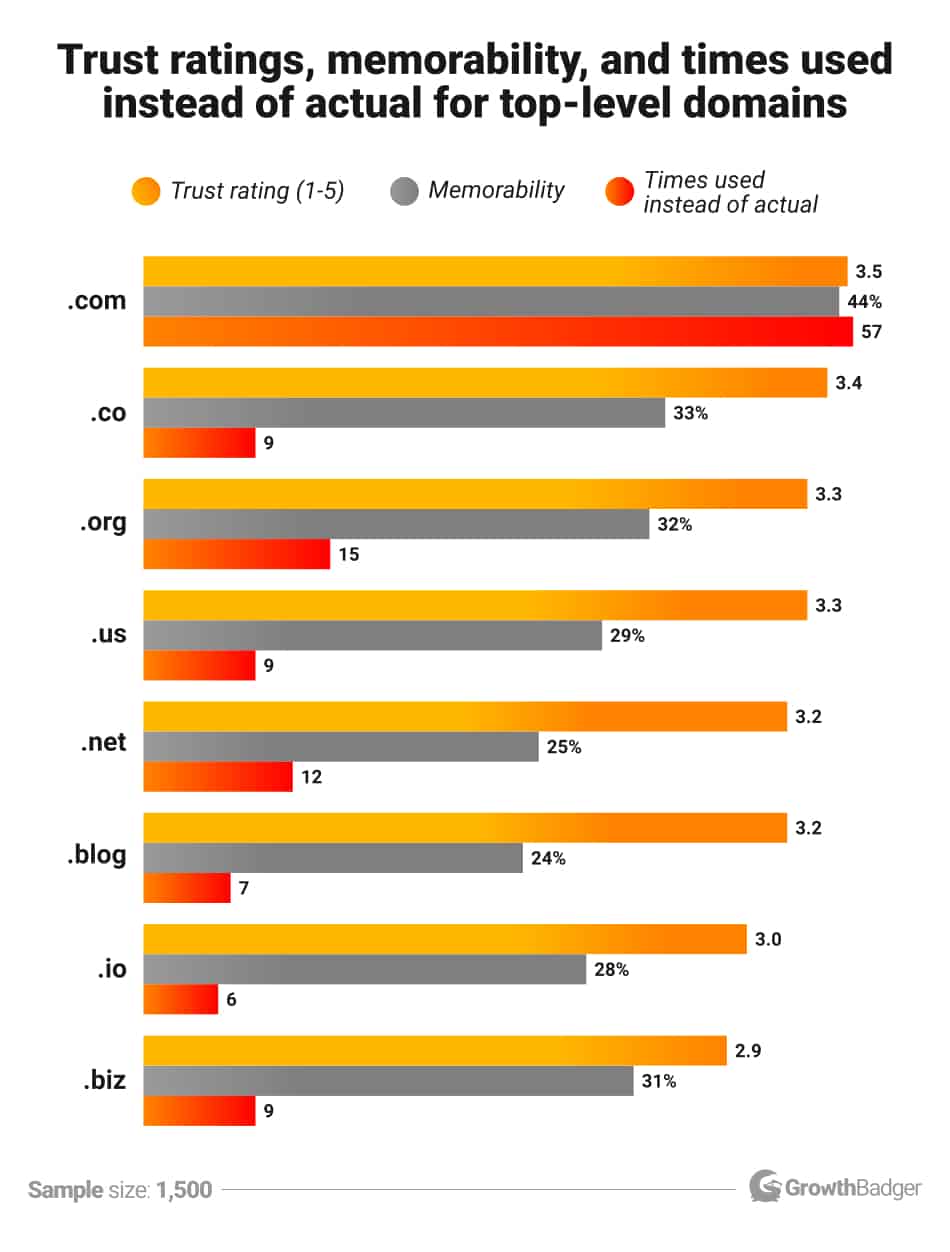 Are you considering .com vs .org vs .net? If so, according to this data, .com has a sizable edge.

A closer contender in most regards would be .co, which is also one of the most trusted domain extensions as you can see above.

But .com still seems to be the best domain extension:

Of course, all of this comes at a price.

Registering a .com domain name is often much more expensive than registering a domain with another TLD:

Is it really worth paying thousands more for the .com than for the .org, .net, or .co domain extension?

As this study shows, .com domains do come with significant benefits. If you’re running an online business and can afford to buy the .com, it’s probably worth it.

But as Cyrus Shepard points out below, that doesn’t mean .com is always the best choice.

It depends on the organization as well as the types of content that will be on the site.

For example, non-profits aren’t required to use the .org TLD. But doing so has become such a common practice that wikipedia.com, savethechildren.com, and charitywater.com all look pretty strange compared to their .org alternatives.

Let’s see what else Cyrus and a few other experts have to say about these findings.

“Wow, terrific study. A few things jump out at me.

1. Obviously, this reinforces .com as the standard choice of domain extensions. As the old saying went, ‘Nobody ever got fired for buying IBM’ (computers). Similarly, buying the .com if you can get it, is typically going to be your best bet. (unless, of course, a visible brand is using one of the other extensions)

2. It’s hilarious to me that people trust .co – a country code top-level domain for Colombia – more than they do .org – a generic top-level domain used by Wikipedia, non-profits, and other orgs.

3. I’d stay away from .biz domains at all cost. Not only does this survey show a low trust, I’ve seen several other studies over the years that show folks tend to associate this extension with spam.

4. Finally, despite the dominant trust and memorability of .com domains, I believe it’s still fair to use the extension that best works for you. Most of the time, that’s going to be the .com. Many sites—Wikipedia being the obvious example—use .org and other extensions with little actual downside. Of course, if you’re a smaller player, or there are other businesses with similar domain names in your space, it’s always going to be best to go with the .com, the reasons for which are made obvious by this survey.”

“I had to double check the .biz numbers with Kyle as I just couldn’t believe them upfront. Nine people, who weren’t originally shown a .biz domain, thought that’s what they might have seen when asked later on? That’s really surprising.

He reminded me that only 9 of 1,500 people acted in this way but I was still shocked.

I’m really happy to see .co domains ranking highly as I naturally trust them more as well. I can’t logically tell you why (close to .com? the new thing for makers?) but it’s nice to see I’m not alone.”

“It’s always been industry standard to secure a .com instead of another TLD due to it being so commonly used. The thought process being; people might forget your URL, or go to the .com site if you use a less common TLD. However, we’ve never had any research backing this theory up, UNTIL NOW!

The fact that 57 people used .com instead of the actual TLD is proof of this concept. What surprised me most is that individuals found both .com and .co to be more trustworthy than .org, (which has historically been thought of as being perceived slightly more credible). I’m curious if the equivalent .org and .us perception of trust has anything to do with 19.4% of testers living in Asia and 9% in Europe where .us might be more readily used or hold more weight?

Incredible work, Kyle! We need more studies done like this in our space!”

“I’m quite surprised with the ‘trust rating’ results. I thought that ‘.com’ would outperform others by a much larger margin.”

Methodology: Who we studied and how

We conducted this research using a tricky survey structure with three major parts:

Part 1: Perceived trustworthiness. We asked how trustworthy people would expect a site to be based purely on its URL, using the made-up brand “mattressrankings.__” as the domain, with the blank filled in randomly with either .com, .net, .org, or one of the five other domain extensions I mentioned above. (We did not specifically draw people’s attention to the domain extensions.)

Part 2: Palate cleanser. The second part of the survey consisted of several unrelated questions designed to distract people and find out their demographics.

Part 3: Memorability. Now that they’d been distracted for a little while, in the last part of the survey we asked people to write the exact URL they saw at the beginning. (They were not able to go back to the original question to see it again.)

Here were the demographics of the 1,500 people surveyed: (In retrospect, we should have used different age brackets since so many people ended up in the 26 – 40 range.)

What did you think of this experiment? Did the results surprise you?

And if you want to grow your business this year, check out my guide to how to build a high-value content marketing funnel.